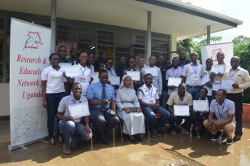 The training, which was held at the Uganda Martyrs University, Nkozi Campus under the theme: “Campus Network Security.” took place from 30th November to 4th December 2015 and was followed by a Direct Engineering Assistance exercise from 5-8 December 2015.

Commenting on the workshop, held with support from UbuntuNet Alliance, the International Network for the Availability of Scientific Publications (INASP) and the Network Startup Resource Center (NSRC) RENU Chief Technical Officer Nicholas Mbonimpa said the training focused on network security since the performance and efficiency of a network is heavily reliant on its security.

“Security of a network can cause limitations in efficiency if it not well integrated as there is a correlation between secured networks, network performance and end user perception. The training has helped participating engineers to have a good foundation on security threats and on how to best approach different attacks. The skills they have acquired will help them build efficiently secured networks.”

Mbonimpa said participants to the workshop were drilled on a number of thematic areas on security including threat models, cryptography, SSH keys and authentication, attack logging and log analysis, secure wireless authentication and intrusion detection.

The Campus Network Security workshop is the fourth training for RENU for the year 2015. Earlier in the year, the NREN was involved in Scalable Campus Network Design, Campus Wireless and Network Monitoring and Introduction to Unix/Linux training workshops. Within 2015, the network has held a total of 7 Direct Engineering Assistance (DEA) exercises.

Commenting on the yearly performance of RENU from a networking and connectivity point of view, the Chief Technical Officer says the NREN has chalked significant progress in 2015.

“RENU has progressed from 12 to over 45 connected campuses and has achieved 100% RENU attributed network availability for more than 75% of the connected campuses in the last quarter of 2015. We have rolled out eduroam in 3 locations and have had a number of capacity building activities that have had a positive impact on the network growth.”

Looking ahead to 2016, Mbonimpa said while continuing with the network expansion drive, the main focus for 2016 will be harnessing standard network services.

‘We would like to make more use of the local RENU network capacity by consolidating and harnessing services like video conferencing, science gateways and eduroam. We also hope to fully integrate the RENU cloud as a service and solution for the connected member institutions.”