UbuntuNet Alliance connects National Research and Education Networks of The Democratic Republic of Congo, Malawi and Zimbabwe under the AfricaConnect2 Project 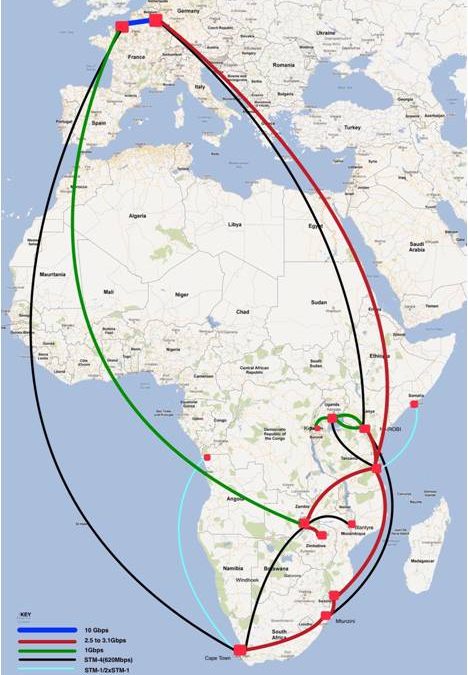 Hundreds of thousands of students, lecturers and researchers from Higher Education Institutions and research centers affiliated to the National Research and Education Network (NREN)s of the Democratic Republic of Congo (DRC), Malawi and Zimbabwe now have a glorious opportunity to access high speed and affordable connectivity dedicated  to research and education networking following the connection of the NRENs of the three nations to the UbuntuNet regional backbone network under the European Commission co-funded €26.6 million AfricaConnect2 Project.

Connection of the three NRENs started in August this year with the activation of a 622 Mbps circuit from Cape Town to Moanda which connected the NREN of the Democratic Republic of Congo (DRC), Eb@le to the UbuntuNet regional backbone.

Eb@le’s connection to the UbuntuNet network was immediately followed by the connection of the Malawi Research and Education Network (MAREN) as UbuntuNet Alliance activated an STM 4 (622Mbps) circuit between its existing point of presence (PoP) in Lusaka and the newly established PoP in Blantyre.

Joining the list of the newly connected NRENs is the Zimbabwe Academic Research and Education Network (ZARNet) which will be utilising an STM 16 (2.5Gbps) circuit between the UbuntuNet PoP in Lusaka and the newly established PoP in Harare. The ZARNet circuit is expected to be extended from Harare to Cape Town.

Connection of the three NREN Members to the UbuntuNet network brings to 11 the total number of Member NRENs connected to the regional backbone. UbuntuNet Alliance has over the past 10 years connected to its internet network Member NRENs of countries of Kenya, Tanzania, South Africa, Mozambique, Uganda, Zambia, Somalia and Rwanda.

UbuntuNet Alliance CEO, Dr. Pascal Hoba says “The connectivity of the three NRENs is special to UbuntuNet Alliance as it brings us closer to the dream of connecting all our NREN Members within the next few years. UbuntuNet Alliance is grateful to all partners especially the European Commission for the AfricaConnect2 Project funding under which the NRENs have been connected. We would also like to appreciate the good work all Telecom enablers involved in the connection of these NRENs. UbuntuNet Alliance also congratulates the CEOs and staff of the newly connected NRENs for their support and patience. These new connections show that the Alliance has performed excellently under the AfricaConnect2 project and is ready for the next phase of the project which we believe will close the existing connectivity gap.”

About AfricaConnect2:
AfricaConnect2 is an EU-funded pan-African connectivity project with a total budget of €26.6 million covering a period of 3.5 years. It aims to support the development and consolidation of high-capacity regional internet networks for research and education across Africa and their interconnection with the pan-European GÉANT network, creating a continental gateway for collaborative research and education across and beyond Africa. The project is managed and implemented through two contracts: UbuntuNet Alliance responsible for Eastern and Southern Africa; and GEANT is responsible for West and Central Africa in partnership with WACREN; and North Africa in partnership with ASREN.