66 percent of African countries have no operational NRENs- World Bank 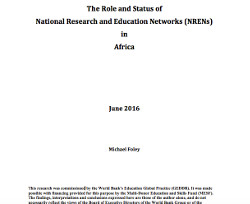 36 of the 54 countries on the African continent do not have operational National Research and Education Networks (NRENs) representing 66 percent of countries lacking operational NRENs on the continent.

This has been revealed in a recent report released by the World Bank titled the “Role and Status of National Research and Education Networks (NRENs) in Africa.”

According to the report, of the 36 non-operational NREN countries, 5 countries have no recorded information on  the establishment of an NREN while the rest of the 31 countries have NRENs in various stages of development.

The report, released in June this year and compiled by Michael Foley, says there is so far no information of NREN development in Central African Republic, Republic of Congo, Djibout, Libya and Lesotho (Which NUANCE announced has started the process of initiating for an NREN in the previous edition).

But on a positive note, 18 countries on the continent boost of operational NRENs that the report has ranked according to their varying levels of progress.

NRENs of Algeria, Egypt, Kenya and South Africa have been ranked as the most progressive with a highest score of 6 which denotes a full maturity stage of an NREN.

Apart from highlighting the progress of the development t of NRENs in Sub- Saharan Africa, the 107 page report also provides guidelines and best practices on NREN establishment.