The NREN’s relationships with governments and ISPs: An expert’s opinion 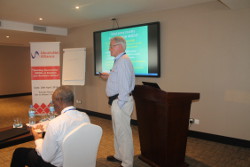 NRENs exist to meet the connectivity and related needs of the universities and research institutions of their countries.  But who determines these needs and who judges whether they are being met?

If most of these institutions are essentially sub-departments of the State, to the extent that their procurement of Internet services is handled for them by some centralised state purchasing or IT agency, then this state agency will determine and impose Internet access policies and provisions upon the institutions and an NREN would have little purpose or role. This article does not apply to NRENs that may exist in such countries.

However in many countries a substantial number of the universities and research institutions, even though they may be “public” or “parastatal” institutions, enjoy very substantial budgetary responsibility and procedural discretion, and conduct their own procurements of Internet and related services.   Such institutions determine their own Internet needs; may choose how much to spend; and have the power to choose and change their suppliers.

NRENs make sense in such countries.  The universities and research institutions can collaborate, to their mutual benefit, in securing Internet and related services through a privately incorporated non-profit NREN.  At the day-to-day operational level, each institution and the NREN conduct a businesslike customer-supplier relationship, with the NREN being managed by its executive officers and Board of directors.  At the governance level, the institutions are the members of the NREN, and as such, jointly exercise ultimate sovereignty over the NREN, mainly through the power to appoint and remove directors.  This article applies to NRENs in such countries.

What should universities ask from Government?

It is widely accepted that NRENs need funding support from their governments.  Many governments in the UbuntuNet Region have invested in research and education networking; sometimes very effectively and sometimes with relatively little real impact on the universities.

Experience in the Region has distilled some pretty firm lessons as to what universities should seek by way of support from their governments as well as what they should not seek.

Ask for seed funds and/or assistance to start your NREN

The initiative or push to found an NREN usually comes from an informal group of ICT managers of universities and research institutions.  However there are many cases where over periods of years such groups could do little more than hold meetings because they had no funds at their disposal to enable sustained work or to purchase anything.

Plan for sustainability – not dependence

The NREN’s business and financial plan should have at its core the NREN’s rapid evolution to a position of operational self-sufficiency and sustainability.  In particular, the embryonic NREN should not seek recurring grants of running funds.

Key to this is the NREN’s establishing sound customer-supplier contractual relationships with the universities and research institutions.  The NREN must offer clearly structured services at stated service levels and unit prices, with the institutions free (in principle) to order as much as they wish and when they wish.  Initially the NREN may depend upon seed grants to cover its overhead costs, such as salaries and accommodation, but the plan must be to reach and surpass the breakeven point after which the NREN can recover its full operational cost through such charges.

Seek out an institution to host the NREN initially

An operational NREN is both an organisation and a network.  Initial efforts are best spent in getting services up and running that prospective member universities can use, rather than on devising and registering a suitable new corporate structure.  However no Government can make grants to an informal group, and so it’s vital to persuade a suitable institution to adopt the embryonic NREN as an internal project for an initial period, with an advisory committee to guide the project’s progress.  Then seeding grants can be paid to that host institution, which can also enter into contracts with suppliers and own the NREN’s assets.  In due course, when a level of financial robustness has been attained, the NREN can be formally incorporated and can take over ownership of such assets and contracts.

Don’t ask for free Internet bandwidth to the campuses

In several countries of the Region national governments have launched projects that set out to provide free Internet access to campuses of universities and research institutions.  The responsible ministry itself or a duly-assigned parastatal institution manages the activity, which it sees as the Nation’s NREN, even though a non-governmental NREN may already have been operational for some years.

Someone in a central office somewhere determines which incumbent operator to appoint as the network provider, and announces ex cathedra how the available bandwidth will be split among the campuses.   The granted bandwidths, once implemented, may or may not meet the campuses’ requirements.  No upgrades are possible until the following year’s national budget has been approved.

In the writer’s experience and view, such centralized interventions are seriously misplaced in their disrespect for the institutions’ autonomy and the institution’s duty to determine and meet their own operational needs, and also have little chance of meeting the real needs of the institutions.

An embryonic NREN should (in the writer’s opinion) intend to establish itself as a businesslike, customer-oriented service provider, and should never think of asking Government or any of its agencies to provide free Internet bandwidth to the campuses.

Note that this is quite different from what is discussed in the next section – asking Government for capital injections to fund infrastructure development. Ask for periodic capital funding to develop the NREN’s network

Ask for periodic funding to develop the NREN’s Network

The main way in which governments and parastatal institutions of the Region have enabled the development of research and education networking in their countries is by the capital funding of the deployment and extension of the high-speed national networks that are available to their NRENs. Examples include:

•    KENET, which has received support in various forms from the Kenyan Government, including the donation of capacity of the TEAMS submarine cable between Mombasa and Fujairah.

•    SANReN (South African National Research Network), which was and is funded by recurring grants from the Department of Science and Technology to the CSIR.  The CSIR owns all rights of use of the very extensive, high-speed SANReN network, and makes such rights of use available to the institutions through TENET.

•    TENET’s Rural Campus Connections Project (RCCP), which is funded by grants from the Department of Higher Education and Training and aims to connect rural campuses of public universities to existing nodes of the SANReN Network.  The first 3-year RCCP Project started in 2011.  RCCP2 is now in progress.

•    ZAMREN, which has the use at no charge of capacity within the national optical fibre network of the Zambian Electricity Supply Commission (ZESCO).

Every NREN may ask for this type of financial support from its national government ministries responsible for universities and/or research.