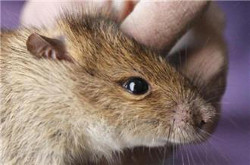 A technology that relies on trained African giant pouched rats — named HeroRATS — to sniff out tuberculosis (TB) and diagnose the disease faster than conventional diagnostic methods is helping save lives in Mozambique and Tanzania.

Mozambique and Tanzania are among 22 high-burden nations suffering from TB, with 58,270 and 63,151 new cases of the disease detected, respectively in 2014, says the WHO.

The rat technology is being used by Belgian non-governmental organisation, APOPO, for speedy and cost-effective testing of TB in the two countries’ prisons, allowing patients to receive prompt treatments.

According to APOPO information sent to SciDev.Net last month (23 March), the project is benefitting from a two-year US$80,000 funding from the United States Agency for International Development (USAID) awarded in 2015.

Charlie Richter, US director of APOPO, says the pilot project is aiding a diagnostic accuracy study of the technology in high risk populations, such as prisons, adding rigorous scientific evidence towards WHO endorsement.

“The HeroRats are presented with a row of ten suspect TB sputum samples. When the HeroRAT detects TB, it hovers over the sample for three to five seconds,” Richter says. “All rat-indicated positive samples are then confirmed by LED microscopy or Xpert MTB/RIF, the WHO recommended technology for identifying suspected cases of TB.”

A single HeroRAT can check about 100 sputum samples in just 20 minutes, compared to conventional methods of microscopy, which would take a laboratory technician two days or more and still miss many of the true positives, Richter says. Early studies show that the rats are able to correctly identify 70 per cent of TB cases and 81 per cent of those with the disease.

It takes about nine months to fully train a TB detection rat, but once trained they can screen thousands of sputum samples every month. “We have trained 59 TB detection rats in our training and research centre in Morogoro, Tanzania, nine were then transported to Maputo, Mozambique,” adds Richter. “Of these, 30 are still active in Tanzania and 8 in Maputo. The others are either retired or died from natural causes.”

The project has screened over 300,000 TB samples, resulting in a 45 per cent increase in TB detection at partner clinics.

Richter tells SciDev.Net that without HeroRATs, the clinics would have incorrectly diagnosed 50 per cent of symptomatic TB positive patients as TB negative.

In the future, APOPO plans to test the rats’ abilities to detect other diseases such as cancer. APOPO hopes to roll out its TB programme in at least six countries by 2020 in Africa and Asia –Bangladesh, Cambodia, Democratic Republic of Congo, Ethiopia, India and Kenya, but cites funding and establishing partnerships as challenges.

*This article first appeared on scidev.net. Read the original version