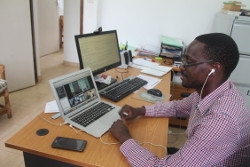 February 2016 was a month of substantial progress for the Middleware for Collaborative Applications and Global Virtue Communities (MAGIC) project as this was the month the project held first virtual meetings of its four Global Science Communities.

The MAGIC project, which is being led by RedCLARA with partnership from Latin America, Europe, the Caribbean, West and Central Africa, Eastern and Southern Africa, North Africa and the Middle East, Central Asia and Asia-Pacific, has developed Global Science Communities on different thematic areas and the project will now strive to develop and introduce middleware applications that these communities will be using to collaborate virtually.

And in February 2016, all four communities successfully held their first virtue meetings through the desktop videoconference system, VC Espresso available in the collaborative platform, Colaboratorio.

During the first virtual meeting of the Global Science Community on e-Health held on 2nd February, Prof. Luiz Messina from the Brazilian Telemedicine Networek (RUTE) made a rich presentation on the state of Telemedicine in Brazil using NREN Network while Prof. José Ramón Martínez of Santo Domingo University of the Dominican Republic gave an overview of the Global Science Community on Biodiversity during the community’s first  meeting held on February 11, 2016.

The last two meetings of communities focusing on Environment and Remote Instrumentation were held on 18th and 25th February respectively where community leaders Dr. David Smith of the University of the West Indies and Patricia Santiago of CUDI, Mexico made their presentations and encouraged community members to collaborate at a global level.

The virtual meetings were coordinated by Tania Altamirano of RedCLARA, Tiwonge Banda of UbuntuNet Alliance and Colleen Wint of the Caribbean knowledge and Learning Network (CKLN).

Following the holding of the first virtual meetings, communities are expected to come up with work plans that will be formulated according to needs and objectives of respective communities.