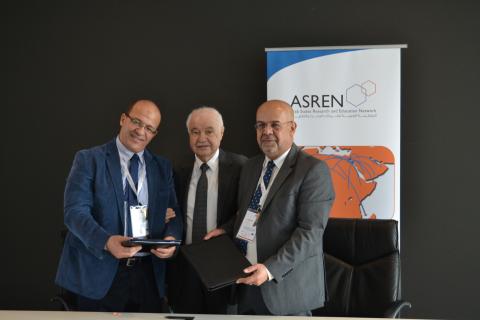 The Arab States Research and Education Network (ASREN) and the Egyptian Universities Network (EUN) have signed an agreement during ASREN’s ninth annual conference in Abu Dhabi, under which ASREN will provide a high bandwidth link between EUN and the pan-European GÉANT network through ASREN’s Point of Presence (PoP) in London. ASREN will operate the link initially at 500 Mbps with the possibility of capacity increases in the future.

The agreement was signed by Eng. Yousef Torman, Executive Director of ASREN and Prof. Ibrahim Fathy, Director of Knowledge and Services Centre (EKSC) at the Supreme Council of Universities (SCU) on behalf of EUN.

EUN is the Egyptian National Research and Education Network (NREN), which provides internet connectivity, applications and services to the research and education (R&E) communities in Egypt. The connection will allow researchers, academics and students to get access to the global R&E network fabric, enabling them to collaborate with peers in Europe, USA, Latin America, Asia and Africa, in addition to other Arab countries.

The agreement marks Egypt’s joining the international R&E networking community with the support of the EU co-funded AfricaConnect3 project, which aims to support the development of high-capacity internet networks for R&E across Africa. In North Africa, the project is being delivered by ASREN, whilst the African sister organisation UbuntuNet Alliance and WACREN manage the project in East-South Africa and in West and Central Africa, respectively with the overall project coordination by the pan-European network organisation GÉANT.

HE Dr. Talal Abu-Ghazaleh, Chairman of ASREN said: “We are pleased to welcome our colleagues from the Egyptian Universities Network community; we sincerely believe that this connection will stimulate and increase collaborations between Egypt and the global R&E community. Connecting EUN is part of our strategic vision and mission to connect all NRENs in the region between themselves and to other parts of the continent and the global R&E community.  On behalf of ASREN, I would like to thank the European Commission for their respective contributions in the context of AfricaConenct3 that have been so critical for this achievement.”

Prof. Ibrahim Fathy said: “This agreement provides EUN and the research and education communities in Egypt with the following features: Internet protocol services, technical skills capacity building, knowledge exchange with GÉANT, ASREN and other regional and international RENs, and knowledge exchange with the wider R&E community through ASREN’s annual conference.”

Helga Spitaler, Senior International Relations Project Manager at GÉANT said: “EUN has been a longstanding R&E networking partner in North Africa, first in EUMEDCONNECT and subsequently in the AfricaConnect projects. GÉANT welcomes EUN’s re-connection to the global R&E network fabric as a first achievement of AfricaConnect3 which also clearly demonstrates ASREN’s leadership capabilities of delivering the project in the region.”