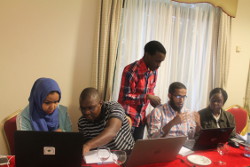 At least 30 NREN and university engineers from the UbuntuNet Alliance region will benefit from two training workshops that will be held as part of the preceding events to the UbuntuNet-Connect 2016 conference to be held on 3-4 November, 2016 in Entebbe, Uganda.

With assistance from its partners, UbuntuNet Alliance will, during the UbuntuNet-Connect 2016 week, hold a five-day Training-of-Trainers workshop for network engineers as well as three-day DevOps training for Application Engineers.

According to UbuntuNet Alliance Technical Manager Joe Kimaili, the Training-of- Trainers workshop, which will be held in partnership with the Network Start-Resource Center (NSRC) and is expected to run from Saturday, October 29, 2016 to Wednesday, November 2, 2016,  will target at least 15 network engineers who will be expected to initiate similar trainings in their NRENs.

Parallel to this workshop will be the DeVoPs workshop for Application Engineers which UbuntuNet Alliance will hold in partnership with the CSRI and the Sci-GaIA consortium.

UbuntuNet Alliance Projects Coordinator Chris Rohrer says the DevOps workshop, which is expected to run from Monday 31st October 2016 to Wednesday 2nd November 2016 will also target 15 engineers from the region.

The DevOps training will be a second one for this year after the Alliance also partnered with the MAGIC project to deliver a similar workshop in Dar es Saalam, Tanzania in April this year.