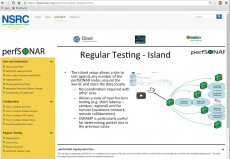 The Department of Energy’s Energy Sciences Network, or ESnet, and the Network Startup Resource Center (NSRC) at the University of Oregon are teaming up to create an extensive video training library to help organizations improve the performance of their networks by deploying the perfSONAR network measurement tools and the Science DMZ network architecture.

One of the first institutions to benefit from the project will be the University of Guam. NSRC staff are flying to the U.S. territory in the Pacific on July 25 to help the university improve its campus network and set up a high-speed link to the University of Hawaii. Prior to the weeklong workshop and perfSONAR installation, NSRC staff will have the six campus network engineers familiarize themselves with the toolkit via the video library.

“We’ll have them view the videos before we arrive and then provide direct network assistance with the installation,” said Hervey Allen, NSRC’s program manager. “We’re really excited to see if people can watch the videos, then install and run perfSONAR, or, if they are using it for basic tests, they can understand the data and what it means. The whole idea is to help them use the tool better.”

ESnet is one of the original developers of the perfSONAR toolkit, which has provided the research and education (R&E) networking community with tools for end-to-end monitoring and troubleshooting of multi-domain network performance. Other current partners in the perfSONAR project are Internet2, Indiana University and GÉANT, the pan-European research network. The perfSONAR collaboration over the past 11 years has also included Fermilab, SLAC, Georgia Tech, the University of Delaware, the ATLAS Great Lakes Tier 2 team at the University of Michigan and RNP in Brazil.

Created in 1986, ESnet is a DOE Office of Science User Facility managed by the Department of Energy’s Lawrence Berkeley National Laboratory, operating a 100 gigabits-per-second backbone network linking more than 40 DOE research sites, including the entire national laboratory system, its supercomputing facilities and its major scientific instruments.

“We’ve developed a good working relationship with NSRC over the past several years, and we started talking about this video project in early 2015 as a way to efficiently transfer ESnet’s expertise to anyone interested in network performance, from DOE scientists to other research organizations,” said ESnet’s Eli Dart, who developed the Science DMZ architecture and will appear in a series of related training videos. “They do a lot of good work in all corners of the world, helping research organizations in emerging economies around the world get up to speed fast and help them bootstrap the development of science networks where it was not possible before.”

Funded by the U.S. National Science Foundation (NSF), the NSRC works directly with the local network engineers and operators who develop and maintain the Internet infrastructure in their respective countries and regions by providing technical information, engineering assistance, training, donations of networking books, equipment and other resources. The end goal in this work is to make it easier for local scientists, engineers and educators to collaborate via the Internet with their international colleagues by helping to connect communities.

“These days, the whole world goes to YouTube when they want to learn something,” said ESnet’s Brian Tierney, who appears in the perfSONAR videos along with Jason Zurawski. “Hopefully both the NSRC and the DOE community will find these videos a useful way to get started and then follow up with more in-depth information as needed.”

Although perfSONAR was developed and is used mainly by large, high-speed R&E networks, it’s also a valuable tool in fledgling networks in developing nations where network bandwidth is expensive and perfSONAR can help local researchers make the most effective use of that investment.