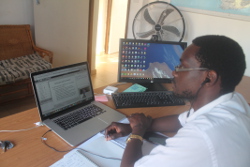 The months of September and October  promise to be busy and eventful ones for the Middleware for Collaborative Applications and Global Virtue Communities, (MAGIC), one of the European Union Co-funded Horizon 2020 projects which UbuntuNet Alliance is an implementing partner.

In these two months, MAGIC will offer Global Health practitioners and others with health-related interests from across the globe a unique opportunity to join their colleagues in a series of eHealth webinars, entitled “Grand Rounds” that will be held virtually every Tuesday starting from September 6, 2016 to October 11, 2016.

The eHealth sessions will be held from 1300-1500 GMT and presenters come will be drawn  from a variety of disciplines and countries, such as Mexico, India, Russia, Brazil and Tunisia. Participants can participate from anywhere in the world, interacting through the virtual platform called, Colaboratorio, designed specifically to enable communities to interact, but also affords a secure, virtual space for continued collaboration.

The meetings will be held as follows:

The MAGIC project (Middleware for collaborative Applications and Global vIrtual Communities), aims to significantly improve the ability of researchers and academicians around the world to collaborate, and promotes and supports four very specific virtual communities of a global nature (e-Health, Biodiversity, Environment and Remote Instrumentation), each moderated by a champion who is an expert in the field.

The development and fostering of Global Science Communities is the major activity of MAGIC as it works to create meaningful ways to engage communities from across the globe.

MAGIC comprises partners from Latin America, Europe, the Caribbean, West and Central Africa, Eastern and Southern Africa, North Africa and the Middle East, Central Asia and Asia-Pacific and is a Horizon 2020 project, supported by the European Commission.

For details on the sessions, registration and more information please go to:
http://eventos.redclara.net/e/eHealth_Grand_Rounds