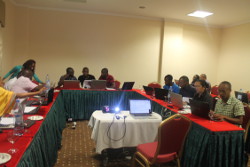 UbuntuNet Alliance 10th Annual General Meeting of Members (AGMM) week  which will be held in Dar es Salaam, Tanzania in April, 2016 will, among other events, include a Federated Applications training workshop for system engineers as well as a capacity building seminar for NREN Managers and Senior University Leaders from the UbuntuNet Alliance membership region.

The 2016 edition of the Alliance’s AGMM week will be held from 26–29 April 2016 and hosted by TERNET, the National Research and Education Network of Tanzania.

The AGMM is the highest policy body of UbuntuNet Alliance that appoints the Alliance’s members of the Board of Trustees.

Featuring high on this year’s AGMM schedule is a three-day Federated Applications (FedApps) workshop- facilitated by the  MAGIC project  as well as a one-day capacity building workshop for NREN managers and Senior University Leaders aimed at enhancing NREN management and leadership skills.

According to UbuntuNet Alliance Projects Coordinator Chris Rohrer, the FedsApps training, which will run from 26- 28 April 2016, will target at least 20 system engineers responsible for setting up and operating an Identity Federation as well as hosting federated services for the members of  their respective NRENs.

As the training will be coming to an end on 28 April 2016, NREN Managers and Senior University leaders will on this day, participate in a day long capacity building workshop mainly aimed at strengthening developing and emerging NRENs.

UbuntuNet Alliance CEO Dr. Pascal Hoba says during this seminar, senior NREN and university personnel will be taken through different areas ranging from but not limited to NREN development, NREN services, sustainability models for African Higher Education and Research Institutions and need for connectivity and e-infrastructure for African universities.

Apart from these two workshops, the AGMM week will also include a national TERNET workshop on April 27 with the actual Annual General Members Meeting slated to take place be  held on April 29, 2016. The full schedule of the AGMM meeting is available online.