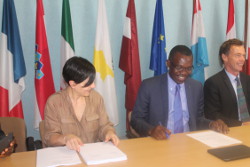 It was a case of killing two birds with one stone; On Wednesday, November 18th on the eve of UbuntuNet-Connect 2015, UbuntuNet Alliance officially signed the €10 Million AfricaConnect2 Cluster 1 grant agreement with the European Commission at the European Union Delegation in Mozambique.

With the venue of UbuntuNet-Connect 2015, VIP Grand Maputo Hotel, only a 15 Minute drive away from the European Union Delegation, it did not require much for UbuntuNet Alliance team to drive to the Embassy to formalise the long awaited contract.

UbuntuNet Alliance CEO Dr. Pascal Hoba signed the dotted lines of the contractual papers in the presence of the Head of EU Delegation in Mozambique Sven Kühn von Burgsdorff. Françoise Moreau, Head of Unit at the EC Directorate-General for Development and Cooperation (DG DEVCO) had arleady endorsed the contract on behalf of the EC on November 12th 2015.

While congratulating UbuntuNet Alliance on the signing of the grant, European Commission International Cooperation Officer Stephanie Truille-Baurens advised all three clusters to work hard in implementing the project saying although the project has been split; it needs to be looked into as a Pan African project whose success will be measured from the progress attained in all the three clusters.

In his remarks Dr Hoba said AfricaConnect2 will build on the success of AfricaConnect which helped reduce bandwidth cost for reserch and education networks in UbuntuNet Alliance region. The CEO also pledged to work closely with the other two clusters for the overall success of the new project.

’Before AfricaConnect bandwidth prices in the region were typically more than 10 times the prices in more developed parts of the world. AfricaConnect has allowed countries once isolated like Zambia to be on the map of research networking and contribute actively. Now that we know that affordable connectivity is achievable we want to partner with our neighbours to pursue our shared vision of a connected and engaged pan-African research and education community.’  said Dr. Hoba.