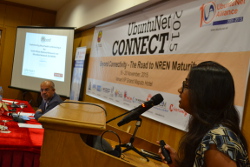 Among the authors that presented their papers at UbuntuNet-Connect 2015 was South African Research Network (SANReN) Network Engineer Kasandra Isaac.

In her presentation, Isaac stressed on the advantages that African NRENs stand to experience from using the research collaboration tool which she said can be used, among others, for distance education, remote meetings or broadcasting of events.

According to the network engineer, the application also offers a range of collaboration tools such as a whiteboard, document repositories, collaboration spaces and shared notes.

She said SANReN started using Mconf after the NREN had embarked on a search for a web conference service by looking at ‘other’ video conferencing tools that were being used by other NRENs.

After looking at criteria such as proof in Use (By trial), success of other NRENs in using a given service, functionality, maintenance and support, ease of use and ease to take into production and cost when deciding on the preferred conferencing tool, Isaac says  SANReN opeted for Mconf after observing that apart from having the other advantages, the platfform has a big added advantage of not recovering a production cost from the user.

The presenter said Mconf has been specifically developed for NRENs to virtually collaborate and called on African NRENs to join Mconf’s Global Academic Network which has a range of collaboration tools that include but not limited to Real-time communication with audio and video, Web conferencing rooms, Federated Identity integration and document repositories.

Another advantage of Mconf, says Isaac, is that institutions participating in the web conference application do not have to worry about connectivity failure since servers from other institutions are able to support an institution that has lost connectivity while on the platform.

“Mconf Global Network is open to any academic institution that wishes to participate, and creates a possibility for global resource sharing that is unique in the web conferencing and video conferencing world. The greatest beauty of the system is that it is a real win-win situation for everyone involved, and the network gets stronger when grown. One institution does not have to worry about a temporary failure in the server or a traffic surge, because there are other servers supporting the system as a whole,” She said.