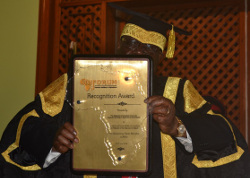 As part of its drive to engage influential bodies and actors to help it lobby for policy support and investment in Higher Education in Africa, the Regional Universities Forum for Capacity Building in Agriculture (RUFORUM) on July 6, 2015 installed Malawi President, Professor Arthur Peter Mutharika as the Champion for Higher education in Africa.

According to information from RUFORUM, the recognition and installation of President Mutharika, which took place at Sanjika Palace in Blantyre, Malawi and came as part of the country’s 51st independence anniversary celebrations, was attended by several dignitaries including Ministers, Members of the Malawi National Assembly and a delegation of African Vice Chancellors led by the Vice Chancellor of the University of Zimbabwe, Professor Levi Nyagura.

A law professor himself, President Mutharika has been vocal in urging research and education institutions in Malawi to be vibrant in coming up with innovations and projects that can add value to the country’s development.

We, at UbuntuNet Alliance Secretariat together with our entire NREN Members, would like to congratulate President Mutharika on his installation as the Champion for Higher Education in Africa and wish him success in his new role.