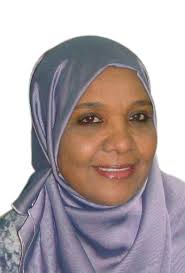 Dr. Iman Abuel Maaly Abdelrahman has been UbuntuNet Alliance’s Vice-Chairperson for the past several years. She was the Founding CEO of SudREN, the Sudanese NREN. An Associate Professor in the Department of Electrical and Electronic Engineering at the University of Khartoum in Sudan, she is also known for her thought-provoking speeches that have always inspired unity and transformation in the research and education networking community at regional and international forums. NUANCE now adapts a speech that she delivered at the recent at UbuntuNet Alliance Networking Cocktail held in Lilongwe, Malawi ahead of the 9th Annual General Meeting of Members held to recognise the former CEO, Eng Dr Francis Tusubira and former Special  Projects Coordinator, Margaret Ngwira:

For eight years, being member of this, UbuntuNet Alliance, family, I’ve witnessed its progress and I’ve learned a lot. The first lesson learned was “how to ubuntu”.  It’s “I’m because we are”, that holds the real meaning of ubuntu.

I also learned that home isn’t the place where we live; it isn’t our country.

Home is our continent Africa.

But, sharing the same dream and working together to make it comes true.  There we belong,. Africa is our home.

We also  learned from those  leaders, Margaret and Tusu’s leadership,  that “Enthusiasm moves the world”  as Arthur Balfour said.

And we learned that success doesn’t only come from hard work; it comes from having good relational skils aswell.

I would like to thank my brothers and sisters at UbuntuNet Alliance for making this continental organisation our extended family.  Thank  you Tusu and Margaret for the role  you played to make this happen and for being the supporting beams to the Alliance for years.