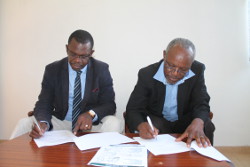 After holding a successful UbuntuNet-Connect 2015, organised jointly with the Mozambique Ministry of Science and Technology, Higher Education and Vocational Training and the Mozambique Research and Education Network (MoRENet), and hosted by the latter in Maputo, Mozambique in November last year, UbuntuNet Alliance has now announced that the ninth edition of the annual research and networking  conferences, UbuntuNet-Connect 2016, will be hosted by the Research and Education Network of Uganda (RENU).

Confirming the development to NUANCE, UbuntuNet Alliance CEO Dr. Pascal Hoba said the conference will be held in Kampala, Uganda on 3-4 November 2016 under the theme: “Optimising the Impact of NRENs on Africa’s Research.”

Dr. Hoba said a number of NRENs had expressed interest to host the event but said the Alliance decided to bring back the conference to RENU, which first hosted the event in 2009, due to what he described as favorable conditions for RENU to host the event.

“It is the wish of the Alliance to see emerging NRENs within our region host UbuntuNet-Connect but we have again chosen RENU due to the advancement it is making as an NREN. The success that RENU has achieved since its established will be a big motivation to representatives of our NREN members that will be in Uganda.”

Commenting on the theme, Dr. Hoba said the  theme is relevant as it seeks to revitalize research on the continent so that researchers and universities are able to come up with effective and lasting solutions to crosscutting problems rocking the continent. He called on authors to submit abstracts that reflect on the theme adding the Call for Abstracts and Sponsorship will be announced soon.

Reacting to the announcement, RENU CEO Eng. Isaac Kasana said RENU has been given an opportunity to boost the level of awareness among the research communities and government agencies of the role played by NRENs in socioeconomic development.