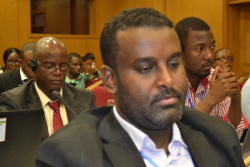 UbuntuNet Alliance would like to convey its best wishes to outgoing Sudanese Research and Education Network (SudREN) CEO Dr. Sami Salih who has left the network following the expiry of his two year term as CEO.

Dr. Salih, who joined SudREN as CEO in March 2014, will now take up the post of Assistant Professor at the School of Electronics Engineering of the Sudan University of Science and Technology.

Confirming this development to NUANCE, Dr. Salih looked back at his term with pride and pointed at a number of achievements SudREN registered during his time as CEO.

Among other achievements, he pointed out the increased number of member institutions from 68 to 88 in two years, the migration to IPv6 for SudREN core members, the building of hosting facilities, funded by the Sudanese ministry of ICT, to provide free hosting services for the NREN members and the SudREN collaboration with MyREN, the Malaysian Research and Education Network, in developing a Video-Conferencing System as some of the notable successes achieved during his tenure.

Commenting on the current state of NREN development in the region, the outgoing CEO expressed satisfaction with the status-quo, but said there is a need for NRENs to collaborate further for the benefit of the quality of research within the region and commended UbuntuNet Alliance for continuing to provide help and support to NRENs with the region and also for collaborating with other Regional research and education networks such as WACREN and ASREN.

In his reaction to the expiry of Dr. Salih’s term, UbuntuNet Alliance CEO Dr. Pascal Hoba described Dr. Salih as a dedicated and committed CEO who worked tirelessly to promote SudREN by among other things trying to get the NREN connected to the UbuntuNet network.