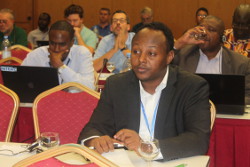 The NREN’s former Chief Technical Officer (CTO) replaces Dahir Hassan Abdi who has been at the helm of the network since its establishment 2006.

Eng. Hussein takes over the hot seat at SomaliREN at a time the NREN is working to establish itself as one of the developing NRENs in the UbuntuNet Alliance membership region following a connectivity grant the NREN is managing with support from different development partners including the World Bank.

Speaking to NUANCE after assuming office, Eng. Hussein said he is honored and excited to head SomaliREN, which he says is not only seen as an agent of Somali’s social and economic development, but also as a unique institution that transcends the country’s political agendas.

The Former CTO says the major focus of his term as CEO will be to build technical capacity at university campus level since campus networks are the building blocks of an NREN infrastructure. He added that another major focus will be to provide connectivity and affordable bandwidth to the campuses.

‘We understand that many NRENs in the region have already accomplished the task of provision of reliable and relatively cost effective bandwidth and are now talking about content and beyond connectivity. It is our hope that very soon, with the help UbuntuNet Alliance NREN Members, SomaliREN will reach that stage and build a strong portfolio of services to showcase to member institutions and show the members that SomaliREN will not be just about affordable bandwidth cost.”

The new CEO has since called on the more established and successful NRENs to partner with the emerging ones with the aim of uplifting the struggling NRENs.