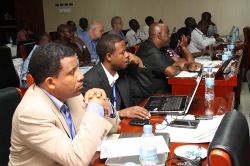 Mahatma Ghandi once said, “We have to be the change we want to see.” Likewise, when we build e-Infrastructures to enable scientists across the world to work collaboratively, this could significantly assist Africa to drive the innovation and development that the continent wants to see.

A recent study published in Palgrave Communications, conducted by members of the eI4Africa project consortium suggests that the African research community is increasingly interested and involved in e-Infrastructure development activities in response to the limited access to dedicated global research and education resources challenge.

“The research findings demonstrate that in Africa a respectable 22.4% of the 58 African countries (as reported by the United Nations (UN, 2012)) have been involved in e-Infrastructure-related initiatives. The examples of South Africa, Nigeria, Tanzania and Uganda show that they are key forces in the emerging interest in developing continent-wide e-Infrastructures, reads the paper.

The paper continues to note that:

“This is particularly encouraging considering the low bandwidth connections limiting such developments in the continent. However, expectations are high, as the rollout of the UbuntuNet network will allow more African countries to participate in worldwide e-Infrastructure-related projects.”

This means that now more than ever, researchers can collaboratively work on more and more ambitious projects. And, in the wake of the Ebola crisis for example, rather than conducting sizable national research in different African countries, such research efforts can be harmonized by Virtual Research Communities over high speed networks like the UbuntuNet and produce significantly more inclusive output. Besides, due to the global nature of life today, problems such as Ebola tend to spill over to neighbouring countries, birthing regional challenges.

Regional projects are needed to solve these regional problems and as the study established, if these projects were developed in collaboration with appropriate partners, they could act as a vital source of socio-technological knowledge sharing between national and international bodies.

The study was conducted as part of the activities of the EU FP7 project, i4Africa. It was carried out between March 2013 and June 2014 with the aim of establishing the state of the art of uptake of e-Infrastructure applications. For details of the this study click here. Pic courtesy of TERNET