Recapping 2016: The year in highlight 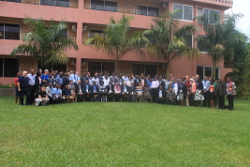 2016 was another eventful and successful year for UbuntuNet Alliance. The Alliance was involved in a number of activities aimed at promoting and improving research and education networking within its region and beyond.

In February, the Alliance started its participation in the Middleware for Collaborative Applications and Global Virtue Communities (MAGIC) project Global Science Communities.

The MAGIC project launched four Global Science Communities on e-Health, Environment, Biodiversity and Remote Instrumentation and the Alliance was an active participant in all community meetings held virtually through the desktop videoconference system, VC Espresso available in the collaborative platform colaboratorio.

The Alliance held its first major activity in Dar es Salaam in April 2016 when it held its 10th Annual General Meeting of Members (AGM) on 29 April 2016. The AGM was preceded by a three-day Federated Applications (FedApps) workshop for 22 system administrators. The workshop was organised by the Alliance in partnership with the MAGIC project. The Alliance also organised a first of a kind seminar for NREN managers titled “Building Successful NRENs in Africa” where NREN managers shared ideas on how to promote research and education networking on the continent.

The Alliance also attended IST-Africa 2016 which was held in Durban, South Africa from 11-13 May 2016. At this event, the Alliance and its AfricaConnect2 partners namely GEANT, WACREN and ASREN jointly held an AfricaConnect2 workshop titled “Value Added Connectivity for Research and Education Networking” on 12 May 2016.

In the months of June and August 2016 the Alliance conducted a mid-term review of the Nairobi Rolling Strategic Plan 2014-2018 and also accepted the Zimbabwe Academic Research and Academic Network (ZARNet) as its sixteenth NREN Member in August 2016 which is the month the Alliance also awarded a 15 year contract to SEACOM to provide point to point connectivity services to NRENs in the region under the AfricaConnect2 project.

As is the tradition, the Alliance capped off the year with its 9th annual conference, UbuntuNet-Connect 2016 held in Entebbe, Uganda. The conference, held on 3-4 November 2016 at the Golf View Hotel, attracted over 140 participants from the global research and education networking community and was preceded by two separate engineer training workshops as a well as an End User Engagement workshop for NREN staff.

As the year 2017 beckons, the Alliance is focused on continuing the implementing of the AfricaConnect2 project in Cluster 1 as well as expanding its portfolio of services to its member NREN.