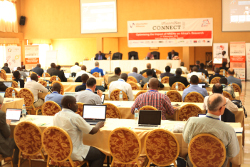 Stiff competition amongst universities, lack of defined metrics in measuring the impact of research and the absence of “known” end-user communities are some of the reasons that are limiting the potential impact NRENs can influence on Africa’s research.

These are some of the observations that were pointed out during an interactive panel discussion held on 4th November 2016 as part of UbuntuNet-Connect 2016, the 9th annual networking conference of UbuntuNet Alliance held in Entebbe, Uganda on 3-4 November 2016.

During the discussion, which was also opened to the 148 participants that attended the conference, Prof. Kashorda posed to the audience a number of issues related to the performance of NRENs in relation to research in Africa. From the discussion that ensued, it is apparent that African NRENs have to do more in order to add value to research that is going on around the continent.

In his introduction, before engaging the panelists and the audience, Prof. Kashorda admitted that while KENET has been providing connectivity as an enabling tool for researchers, the NREN is yet to measure the impact that of its connectivity service is having saying this has been hard mainly due to the absence of a “known community of researchers” the NREN is serving.

“African universities are very competitive. They are competing to be considered the best in their region or on the continent; as a result, our universities are reluctant to collaborate with each other. This results in universities in concentrating on individual research projects that are not noticeable enough by the NREN and the community. This makes it hard for the NREN to influence and play a major role in the continent’s research,” said Luhinda.

In his contribution, Dr Gyampoh of AAS questioned the lack of clear defined goals, needs and presence of NREN communities, elements he said are important in determining whether NRENs are having any impact on research that is being undertaken on the continent.

“When we say we want to optimise the impact of NRENs on Africa’s research, we are assuming that there is already some impact, but the questions that we should be asking ourselves are: Where is this impact? Has this impact been measured, if yes, who has measured it and how can we access it? Without answering these questions, it is hard to start talking about optimising something that is not even on the ground yet.” noted Dr. Gyamphoh.

Commenting further, Dr Gyampoh, who leads the Climate Impact Research Capacity and Leadership Enhancement (CIRCLE) programme at AAS, said another challenge that exists within the African NREN set-up is the absence of defined research communities which NRENs are supposed to be serving.

“When we talk of the “NREN community,” what exactly is this community? is it a community of IT experts from universities operating the network, or groups of researchers or students from universities who are doing the actual research on the ground? If it is the technical experts we are targeting, then it is another thing but if our community is made up of known researchers then we need to define the needs of these researchers and make sure that the NREN is providing these needs because the needs of these research communities are beyond just connectivity,” noted Dr. Gyampoh.

Taking their turns, members of the audience gave varying contributions to the discussion.

Research and Education Network of Uganda CEO, Eng. Isaac Kasana said it is high time African universities started believing in themselves and their products by collaborating with each other in research fields that have a direct bearing on their communities. He said the NREN should be able to facilitate these collaborations.

The panel discussion was the sixth of the seven sessions of UbuntuNet-Connect 2016, which drew 148 participants from 33 countries from 5 continents. 33 research papers focusing on building and expanding the NREN, Network security, open access and global collaboration among other themes, were presented during the two day conference.

All presentations made at the conference are available online.