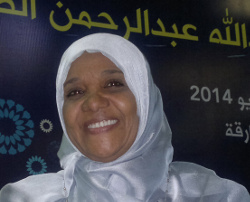 The UbuntuNet Alliance family is once again happy to be associated with its Vice Chairperson and Board Member Dr. Iman Abuel Maaly Abdelrahman, who was in June this year named as the recipient of the 2015 Sudanese “Distinguished Arab Woman Engineer” by the Federation of Sudanese Engineers, the biggest professional organisation for engineers in Sudan.

The former Sudan Research and Education network (SudREN) CEO, currently saving as Head of the Department of Electrical and Electronic Engineering at the University of Khartoum in Sudan, beat competition from 32 women engineers from her country to win the award.

The award aims to encourage and reward women engineers for their accomplishments and achievements, and also to profile them as role models for young women engineers.

By receiving the award, Dr Abdelrahman and other national winners will be interviewed by the Federation of Arab Engineers in Morocco to determine the winner of the 2015 “Distinguished Arab Woman Engineer” at world level.

Sharing the good news to NUANCE, Dr Abdelrahman expressed gratitude to the UbuntuNet Alliance for supporting her work as SudREN CEO, her biggest achievement saying without the Alliance, SudREN’s and her achievements would not be shining as bright as they are now.

“I am honored to be receiving this award especially considering that it’s evidence to all young women that success is not difficult. I believe in the strength of women and that by developing confidence, women can achieve their goals. After getting this award I am also optimistic that I can achieve my dream of being named the 2015 “Distinguished Arab Woman Engineer,” at world level. I would like to thank the UbuntuNet Alliance’s staff, Chair and Board members for the support which they have been giving me for years. Specifically, I would like to express special gratitude to Cathrin Stover and Margaret Ngwira for being my role models.”

Dr. Abdelrahman received her B. Sc. Hons in Electronics and Telecommunication from Cairo University in Egypt, and her Ph.D. and M. Sc. in Electrical Engineering from the University of Khartoum. She is the Founding CEO of the Sudanese Research and Education Network SudREN, the NREN of Sudan. She has been on the UbuntuNet Alliance Board since 2009.

UbuntuNet Alliance congratulates Dr Abdelrahman and wishes her success at the final stage of the award.