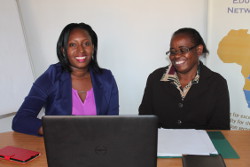 June 2015 was another great month for the UbuntuNet Alliance Secretariat as it welcomed and played host to RENU, Uganda’s NREN’s Finance and Administration Officer Deborah Atukunda who popped in on June 16 for a three day learning visit.

During the visit, Deborah spent time with the Alliance’s Finance and Administration Manager, Tiwonge Banda and Accountant, Beatrice Ng’ambi who shared notes with her on how operations are handled at the governing office.

RENU’s CEO, Isaac Kasana says RENU decided to send Deborah to the UbuntuNet Alliance Secretariat to foster the spirit of oneness within the Alliance and also to allow her get exposed to broader administrative issues as RENU is growing so fast hence needing more experienced personnel.

And describing her visit, Deborah says she learnt a lot during her stay at the administrative offices.

“I had a great time at the UbuntuNet Alliance offices and learnt a lot in the areas of finance and administration from Beatrice and Tiwonge respectively. I believe the skills I obtained during the visit will go a long way in improving our efficiency at RENU.”

In his remarks, UbuntuNet Alliance Finance and Administration Manager, Tiwonge Banda commended RENU for facilitating Deborah’s visit saying exchange visits among NREN Members help in cementing sharing and oneness which are the core values of the UbuntuNet Alliance.

“As UbuntuNet Alliance, we believe in the philosophy of sharing and networking and even though much of these values are demonstrated through the networking and connectivity that UbuntuNet provides to NRENs, we believe that this is not enough and we therefore encourage physical visits and interaction among NRENs and the Alliance as was the case with Deborah’s visit. We were happy to host her and we look forward to hosting members from other NRENs.”

The Research and Education Network for Uganda, RENU, become operational in 2013 but is currently seen as one of the fastest growing NRENs in the region.